This is a picture of me with my up line, Pearl and my stampin’ enabler, Carolyn! 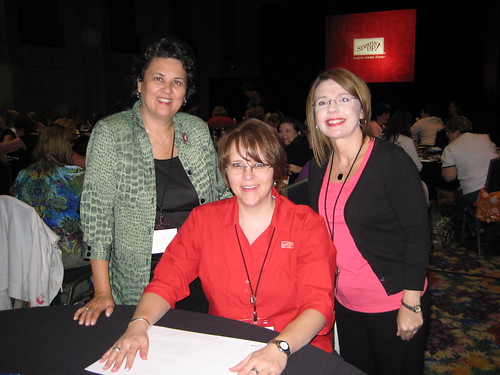 We had a really great time together. Pearl always makes getting lost fun and full of adventure! Stockades, I mean Stockyards anyone??? And how about a mall, they have one around here don’t they? Aw, JoAnn’s will do – 2 hours later. . . . I am kinda hungry!

Ok, so we did actually eat on our trip – one night we headed out to the Stockyards (finally found it) and went to a really cool steak house, H3.

While waiting to be seated, I got my picture snapped. 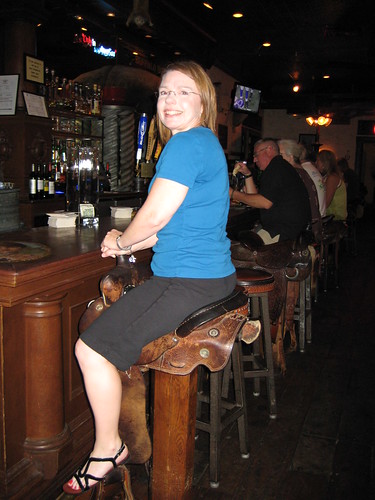 The bar was quite interesting in that instead of traditional *bar stools*, they had *bar saddles*. Kinda difficult for a shorty like me to climb on! But I did it! Of the 6 of us, Carolyn was the other one who braved the saddle climb – I decided my friendship was more valuable than posting her pic however! LOL!

We all decided to partake in this – 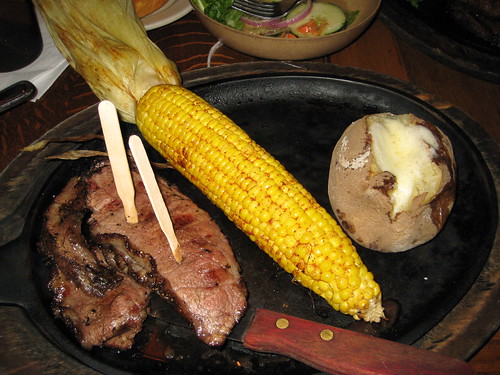 A smoked steak! Ever heard of that? It was new to me – and BTW, to die for! Yes, I took the picture with my baked potato a little naked – he was covered, smothered in yumminess right after I took this picture just so you know.

So after leaving and strolling through the Stockyards, we *tried* to head back to the hotel.

Sadly, we were pulled over by Officer *Pat*, as Pearl referred to her as a him! We were lost bigger than anything and happen to turn from the wrong lane. Pat thought we had been drinking as we were all laughing hysterically and pulled us over! Anyway, Pat gave us direction 3 times and let us go! And on we went.

See, it is always an adventure when Pearl drives!

My name is Libby Fens — I’ve been a Stampin’ Up Demonstrator since September 2007! I currently hold monthly Card Buffets, of which I LOVE! Lots of work, but, I love it! Check out my events page to sign up for an event... or go online to shop my store! Read More…

Give me your email to be notified of new articles delivered right to your inbox!

Give us your email to have updates and articles delivered directly to your inbox. You may opt out at any time.